The Dutch Zwarte Piet-BLACKFACE Money making season 2013-2014 came to an end.
Sinterklaas and his Blackface slaves(dutch call them Zwarte Pieten/Black Peters) have left the country on 6th December 2014.

But the BLACKFACE MONEY MAKING business continues!
Businesses already decide on acqusition for 2015.

BLACKFACE=RACISME=MONEY
This needs to stop!

We urge you to raise your voices, demonstrate or do whatever you can contribute to end this!

What can you do?
-Keep sending your pictures and other
information on companies or individuals
who make money of Blackface, worldwide!
-Take action and call,email or contact the
suspected holding yourselfs.
Keep us posted
-Keep sending the letters to the targeted
compagnies who sell at the Dutch
Bijenkorf Department store:
*Kardashians
*United Colors of Benetton
*Louis Vuitton
(see the Action pages on this website)
-Use social media to expose these suspects!

On 4 december 2014 the last in the series of Pickets Protest took place at the Department store Bijenkorf in Amsterdam. 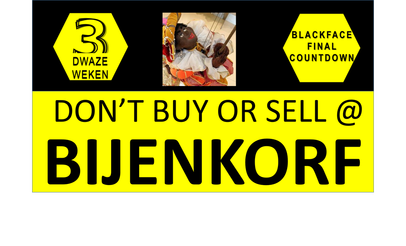 The department store BIJENKORF was picketed on 29 and 30 November 2014!
At the same time Sinterklaas and his BLACKFACE slave helpers visited the store.

The Bijenkorf is famous for the giant BLACKFACE dolls!
This department store holds the longest and oldest BLACKFACE MONEY MAKING record!
This racist practice need to stop!

NOTES
This is a picket action!

-WHAT IS A PICKET ACTION?
Picketing is a form of protest in which people (called picketers) congregate outside a place of work or location where an event is taking place. Often this is done in an attempt to dissuade others from going in ("crossing the picket line"), but it can also be done to draw public attention to a cause.
Picketers are to be NON-VIOLENT. It can have a number of aims, but generally to put pressure on the party targeted to meet particular demands and/or cease operations.

-DO NOT FORM A BIG CROWD, TRY TO SPREAD AS MUCH AS POSSIBLE

-DO NOT STAND IN THE WAY OF COSTUMERS OR WORKERS OF THE BIJENKORF WHO WANT TO ENTER THE BUILDING!!

-DO NOT DISRUPT THE PUBLIC ORDER

Over the weekend we have increased the pressure department store the Bijenkorf to stop supporting the Dutch black-face tradition. Dozens of people withstood the cold and picketed the chain store.
As we approached the store on Saturday, a band consisting of BLACKFACE Petes was playing music outside. Half an hour later Sinterklaas and more BLACKFACE Petes were welcomed into the Bijenkorf. For four hours visitors of the Bijenkorf were able to enjoy the spectacle of BLACKFACE Petes, acting like internationally is know as 'BAMBOOZLED', while doing their December-Season-shopping.

On the street we are confronted with a lot of twisted arguments which defend the tradition. People should protest in the summer, so when there are no BLACKFACE Petes around (?)
'We are ruining a children's celebration', while for black children the tradition is nothing to celebrate. People even say that the racist abuse in this country is a result of people wanting to change black Pete. A classic blaming the victim response. A perfect example of privileged thinking.

International solidarity is needed against the Bijenkorf. While a lot of people approached during the picket are supportive of the actions and sign the call for a boycot of the Bijenkorf, opposition also takes the form aggresive abuse. This weekend even violence was used against one of our activists. This is totally unacceptable.

We call on you to take a public stand against this racist BLACKFACE practice and BOYCOTT the departmentore BIJENKORF!
Among the most prominent brands being sold at the Bijenkorf are Benetton, Louis Vouitton and the Kardashians. All of which have taken a stand against racism before, but uptill now they don't dare to take a public stand against the racist caricature of the Sinterklaas fest.
The costumers of the Bijenkorf are trying on and buying their products while being confronted with the giant BLACKFACE dolls that clime up and down ropes in the center of the store. (scroll down and see pictures and videos).
One cannot be in the Bijenkorf,at this time of the year, and not see them! Therefore all brands in the Bijenkorf are being associated with BLACKFACE and we urge these companies to take responsibility!

This racist caricature BLACKFACE Peter, or as the Dutch call him ' Zwarte Piet,' is the perfect example of how the Dutch society deals with racism and discrimination. It is not dealt with at all, it is ignored. "If you don't see it, it does not exist".
Zwarte Piet has become the symbol of how racism in the Netherlands is institutionalized.
Mocking people of African Descent, on a large and brutal scale like this, is actually the way the Dutch show their Afro-phobia.
Of course people say, they did not mean it like that.......it's harmless. Well, racism is never harmless....
This is why the information about this tradition and the uncritical support by these brands should be spread as much as possible.
Recent research shows that the businesses make 530 million euro during this BLACKFACE MONEY MAKING season, in which BLACKFACE Zwarte Piet plays a key figure role.

We want a Sinterklaas fest for ALL children of the Netherlands.
So JOIN US on the 4TH of DECEMBER! 19.00 hrs
"TAKE DOWN BLACKFACE"
#TimeToKickTheHabit

BLACKFACE AT BIJENKORF
Today Sinterklaas and his BLACKFACE slave helpers came to visit the BIJENKORF.
Around 13.00 hrs they arrived, welcomed by a small crowd of their fans and of course the picketers of Drie Dwaze Weken. There was also live music from a actual BLACKFACE formation.
The racist party shook some hands, pictures where taken and then he went inside the BIJENKORF building to sit in the center of the Atrium. The security from BIJENKORF told us that there were some tourists inside the building, that really were offended and raised there voices while Sinterklaas and his Zwarte Piet/BLACKFACES were conducting their racist practice.

People from all over the Netherlands, annually visit the BIJENKORF during the 'Three Crazy Weeks' (Drie Dwaze Weken) to see the BLACKFACES and especially for the GIANT BLACKFACE DOLLS (see video, scroll down).
The BIJENKORF is making money of BLACKFACE for decades.

BLACKFACE=RACISM=MONEY
During this season the multinationals incl. Bijenkorf make 530 million euro on this Sinterklaasfest.
So that includes the racist stereotype caricature of BLACKFACE. The Dutch call him Zwarte Piet.
The Dutch really need to stop mocking people of African Descent!
This is pure racism and it need to stop right now!

What can you do?
-Take pictures of blackfaces in the Netherlands and send them to us
*twitter:@driedwazeweken
*email:driedwazeweken@gmail.com
-Spread the word, raise your voices, share our messages!
-Go to the Dutch embassy or council in your country and complain!
-SEND THE LETTERS TO THE TOP BLACKFACE MONEY MAKING businesses (Top Selling Brands @Bijenkorf)
*Kardashian Kollection
*United Colors of Benetton
*Louis Vuitton (compagny LVMH)
(see Action pages on this website)

It's time for the Dutch, to let go of racism, it's
#TimeToKickTheHabit

The message of the protesters was clear: '2014 IS BLACKFACE/ZWARTE PIET FINAL COUNTDOWN'. Putting a spin on the department store's slogan for their annual sale the 'Drie Dwaze Dagen' (Three Crazy Days), this initiative calls for Three Crazy Weeks (Drie Dwaze Weken, #3DW) instead, in which there will be ongoing protest, on- and offline, against the department st﻿ore and all other store (chains) who profit from the BLACKFACE figure Zwarte Piet and incorporate it in their communication or products.


"BLACKFACE NAME CALLING IN 1926, SINTERKLAAS RESPONDS "IT IS NOT HIS FAULT HE IS NOT WHITE LIKE YOU"